Biodiesel, bioquerosene e HVO: o papel dos biocombustíveis na política nacional de descarbonização — How biofuels can contribute to the national decarbonization policy: that is the subject of a dialogue that will be promoted at the Federal University of Goiás (UFG) in May. “The goal is to unite academia and the public and private sectors to identify efforts in the area of biodiesel, biojet fuel and renewable diesel as alternatives to fossil fuels”, explains professor Lais Thomaz, the event’s organizer.

The choice of the State of Goiás to host this event was not by chance. The state is among the major producers of soy and sugar cane, the main raw materials for the production of biodiesel and ethanol, respectively.

Lais, who is a professor at the Faculty of Social Sciences and coordinator of the Global Studies Center (NEG, in Portuguese), explains that all national policy must also be discussed at the regional level, and quotes the National Biofuels Policy (RenovaBio) as an example, which promises significant impacts on the production in Goiânia.

“RenovaBio brings good prospects for producers in Goiás, and also for academia. At UFG, for example, we have research being done for new raw materials, such as macaúba, and RenovaBio has the potential to encourage innovation, the search for new raw materials that allow an increase in the production of biofuels, without the need to expand the area destined for agriculture ”, reports Lais.

The event will be divided into three panels: Research and Policies for Biodiesel, Regulatory Framework for Biojet fuel and Renewable diesel, and Evaluation of the Results of RenovaBio. Lais points out that the event is aimed at both public agents, entrepreneurs and researchers from Goiás, as well as actors from all over Brazil involved with the biofuels sector. The panels will feature presentations from the Ministry of Mines and Energy, Ministry of Science, Technology, Innovation and Communications, National Agency of Petroleum, Natural Gas and Biofuels, Embrapa, Federal Universities of Viçosa and Rio Grande do Norte, Granol (biodiesel industry) and Gol Linhas Aéreas Inteligentes (who is interested in the use of biojet fuel).

“We also want to count with the participation of society in this dialogue”, she invites.

“All of these projects can be identified by society as positive, as they help Brazil in the transition to a low carbon economy, foster family farming and bring positive impacts for the entire chain, reaching the consumer. This dialogue is important so that we can also increase partnerships ”, concludes the professor.

The event is promoted in partnership with the Legislative Assembly of the State of Goiás, Ubrabio and UFG (Institute of Chemistry; Center for Global Studies – NEG, Faculty of Social Sciences, School of Agronomy and Rectory of Extension and Culture). Translated by : Elisa Cascao 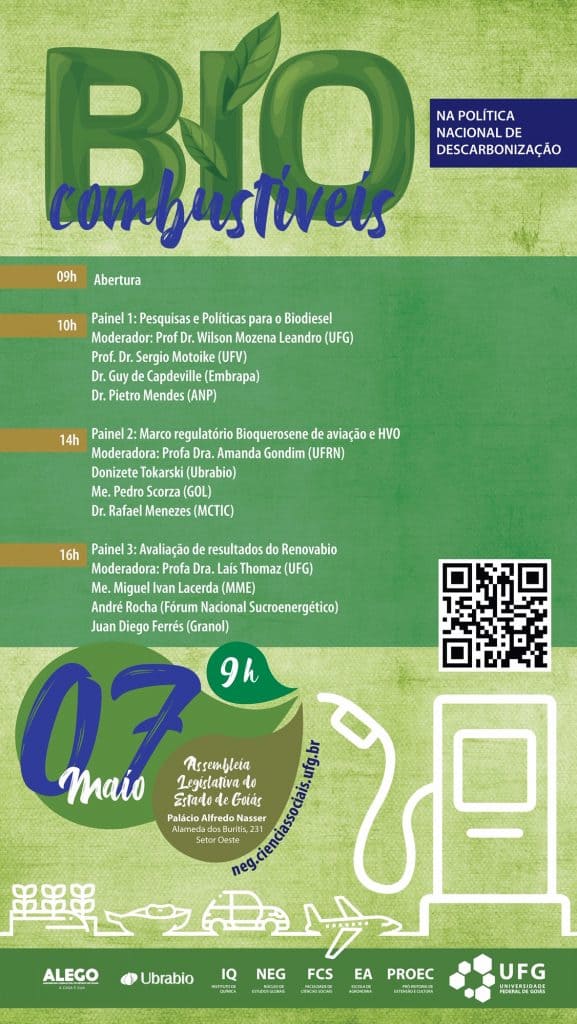